This is the same product as the OBD-II UART. The difference is this version comes with the appropriate cable in fancy clamshell packaging and is meant for our distributors that need it. Regular customers are welcome to order, but we want to limit the amount of extra packaging finding its way into the trash heap.

This board allows you to interface with your car's OBD-II bus. It provides you a serial interface using the ELM327 command set and supports all major OBD-II standards such as CAN and JBUS. The board also provides a footprint which mates directly to our FTDI Basic or a Bluetooth Mate. The DB9 connector mates with our DB9 to OBD-II cable listed below. 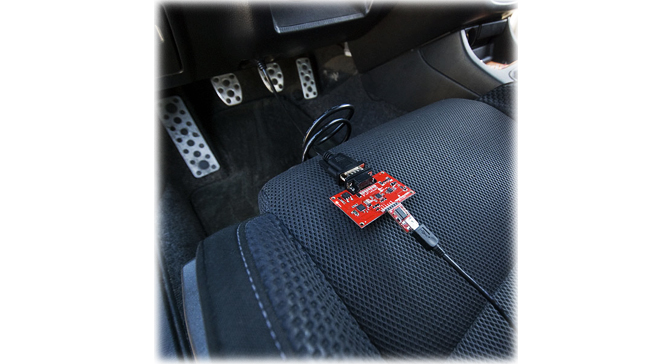 On-Board Diagnostics, Second Generation (OBD-II) is a set of standards for implementing a computer based system to control emissions from vehicles. It was first introduced in the United States in 1994 and became a requirement on all 1996 and newer US vehicles. Other countries, including Canada, parts of the European Union, Japan, Australia and Brazil adopted similar legislation. A large portion of the modern vehicle fleet supports OBD-II or one of its regional flavors.

Among other things, OBD-II requires that each compliant vehicle be equipped with a standard diagnostic connector (DLC) and describes a standard way of communicating with the vehicle’s computer, also known as the ECU (Electronic Control Unit). A wealth of information can be obtained by tapping into the OBD bus, including the status of the malfunction indicator light (MIL) diagnostic trouble codes (DTCs), inspection and maintenance (I/M) information, freeze frames, VIN, hundreds of real-time parameters, and more.

STN1110 is an OBD to UART interpreter that can be used to convert messages between any of the OBD-II protocols currently in use, and UART. It is fully compatible with the de facto industry standard ELM327 command set. Based on a 16-bit processor core, the STN1110 offers more features and better performance than any other ELM327 compatible IC.

CAN Bus Shield - (OBD-II) CAN-BUS is a common industrial bus because of its long travel distance, medium communication speed and high reliability. It is commonly found on modern machine tools and a..

MCP2551 High-speed CAN Transceiver IC - DIP The MCP2551 is a high-speed CAN transceiver, fault-tolerant device that serves as the interface between a CAN protocol controller and the physical bus. The..

OBD-II Connector OBDII is an on board diagnostics standard that is used on a large variety of cars. OBD-II provides access to numerous data from the engine control unit (ECU) and offers a valuable ..

Car Relay 40A 12-14VDC This 40A Car Relay is a 5 pin changeover relay. Instead of making and breaking a single high voltage circuit, it alternates the closing and opening of two circuits - 'changin..

OBD-II Connector with Shell OBDII is an on board diagnostics standard that is used on a large variety of cars. OBD-II provides access to numerous data from the engine control unit (ECU) and offers ..

OBD-II Splitter Using this convenient OBDII splitter to connect the latest insurance, GPS or any other applications to your vehicle can save you money and help to promote safer driving. It works wi..

OBD-II Male PCB Connector - TH OBDII is an on board diagnostics standard that is used on a large variety of cars. OBD-II provides access to numerous data from the engine control unit (ECU) and offe..

Car Relay 200A 12-14VDC This is a Battery isolator (or split charge relay) which allows an auxiliary battery to be charged by the vehicle's system, yet not participate in engine starting. It also p..